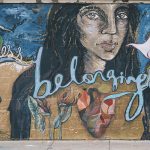 Across Boston and Cambridge, the ancient river Charles etches its way through the landscape creating intersecting islands of people.

Woven between the transient populations of university youth, migrant communities, cantabrigian locals and the ever imminent threat of gentrification, the river gently threads all of Boston’s diverse groups together. At the threshold of Area 4 (now being renamed the Port Neighborhood), old Cambridge and all the universities, is our wall. In a place of so many intersections, we wanted to explore the question: “What makes us feel like we belong?” Some would say respect from their family for making the decision to pursue their dreams; for others, finding acceptance in a new place when they’ve been displaced from their home and transplanted elsewhere in a foreign land; for some, finding a confidant with whom they can share their most personal secrets. A sense of belonging goes beyond just a desire: it’s a basic human need that drives us all. The mural depicts a multi-racial person, with locally found flowers growing out of her chest. The Charles river weaves and snakes through her body and emerges into a ‘port’ of sorts. A port where one comes and docks, and is simultaneously welcoming, but also a checkpoint or threshold. In a place of so many intersections, the mural explores the questions of belonging.

In each of the small plots on the map of the Charles, we had different members of the community “dock” and write one thing that makes them feel like they belong, to create a sense of ownership and community involvement. There are a number of different birds specifically selected to represent different cultures; the birds sit on the river like a branch, representing people from Cambridge who have come from different parts of the world, and settled on the branch of this river.

For more on Belonging check out the Art in Public Space NuVu + Fearless Studio: https://cambridge.nuvustudio.com/studios/fearless