From your Strength, I Weave Beauty 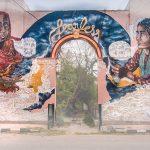 “From your Strength, I Weave Beauty”

Every winter, a thick blanket of fog descends over Delhi, casting everything in a misty invisibility blanket of white. Nothing remains visible, only adding to the mystery and lack of safety. But in its folds are communities, stories and fears unseen. Early in the morning and late in the night, the most unrecognised inhabitants of the fog emerge. Women engaged in prostitution by their in laws amongst other communities whose stories remain invisible to us.

In Delhi, The Fearless Collective, collaborated with Sewing New Future to bring to visibililty to communities that have traditionally engaged in prostitution in Najafgarh, through a participative process that sought to illuminate the blocks placed on us by society and by ourselves. Adolescent girls are married off and forcibly engaged in sex work by their inlaws in a vicious and recurring cycle from mother to daughter. Sewing New Futures is an alternative livelihood generation scheme so poor adolescent girls and women can break this vicious cycle of intergenerational prostitution. They offer the community with paid skill training, child-support and education in their centre. In an intimate workshop ritual, we shrouded ourselves in gauzy fabric as a symbol of ‘fog’, and asked each girl to describe ways in which they go unseen, specifically things they hide from from the public eye and things socially which they are expected to conceal. Slowly these invisible internal worlds were brought to visibility. The workshop took place in a small dance studio filled with twenty giggling girls between the ages of seven and nineteen. They spoke to each other and played local pop songs. Fierce while they danced a Bollywood number, but shy when asked to share their individual experiences. It took some ice breakers and more Bollywood moves before the girls began to reveal their experiences. Many spoke of being expect to cover their bodies, their sadness, their insecurities. They expressed how they felt this creates an inability for change: “how can we make progress if we don’t talk about the things which make which create sadness,” one girl asked. On the second day a van pulled up in Lodhi Colony, a forty minute drive from the outskirts where the workshop had been conducted. The girls tumbled out and enthusiastically announced they were ready to paint. They learned the basics, how to layout a fill, do simple shading and overlay pattern. The image itself, inspired by their stories and those of their families, is of two women from the community and emerged from a collaborative process- a searching and reaching towards each other, through the fogs that seek to keep us apart. In the soft pink corridors of Lodhi colony, two women sit side by side. On the left side an older woman steps out of the mist. Struggle has carved it’s lines into her face as she navigates the night inside her. On the other side her daughter pulls this fog out of the dark sky and weaves it into alchemical threads of gold, creating a new future for them both. Fearless.