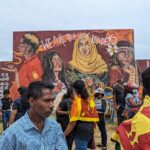 It’s all in the name, a searing play on words; Gotagogama is a protest site set up by a network of activist, citizen, artist and youth groups, working together to provide support, food, water, access to some medical care and toilets to the citizen lead protests in Colombo. It’s not just a site of protest, but a utopian village that the people of Sri Lanka have established as a battleground and a dream. This is the heartland from which the people resist, organize, question, protest, sing revolutionary songs, strategize and unite.  A village complete with libraries, art galleries, studios, media camps, cinema halls with movies and cricket matches being screened. A microcosm of possibility. Sri Lanka has seen an outpouring of powerful citizen led protests in the last 4 months. In this time, people have been out in the streets, occupying protest sites (the Galle Face occupation just exceeded 100 days), taking over symbolic  government buildings and demanding accountability, from a corrupt Government that has driven the country into its current economic crisis and political instability. Their demands were for an “end to the corrupt activities of corrupt politicians and the resignation of the Rajapaksa government.”

In this context, with the people completely sure about what they no longer wanted and of the systems that no longer served them, we chose to come together and imagine a future of leadership that we DO want. To look at how we want power and governance to be manifested in this future. We came together to recognise the power and potential in a movement that is lead collaboratively, from the grassroots up.

The workshop was attended the workshop was attended by a group of people representing various people’s and workers movements – garment factory workers, the queer community, sex workers, lawyers, the Slave Island community and youthand our Fearless Ambassadors Vicky and Minal from Sri Lanka. We gathered together on a giant map of an imagined world, on the 15th of April, to dream about future governance, power systems and leadership.

But before any space of imagination- we have to confront realities and lived fears about our current leaders.

What are some of the fears we have about our power structures?

The lack of accountability with our leaders,

The economic crisis will force more women to turn to unprotected and exploitative forms of labour,

Lack of healthcare, losing our jobs, companies capitalising on the crisis,

There is no kindness.

The fear is never ending. Our workshop started with naming those fears and then burning them like the flames that were being held up high at protest sites.

Having left those fears behind we asked-

What is your source of power? What does good leadership look like?

People’s source of power is:

each other’s resilience and kindness,

People protesting for us,

On the spread out the Fearless Futures Map we asked everyone to locate themselves the ongoing movement in Sri Lanka and how/where they place themselves. A lawyer placed herself at the front-fighting and defending everyone, an Indian as an ally, a union leader as the representative of their community, an artist in archiving and representing, and another in digital campaigning.

The final question was how we see our leaders in the future. What characteristics must they have?

Each one of us imagined a collective and lateral leadership driven by community leaders, identified by the community, who have an inclusive and progressive outlook and justice for marginalized communities at the core of their work.

“Each leader must work at the grassroot level to prove themselves worthy of leadership.”

“ The power should be held by those at the margins, collectively, democratically.”

“A leader who listens”

“Maybe not one leader”

“A leader that is identified by the community”

One by one we spoke about leaders in our own lives, or histories that we felt embodied and empowered us.

We found that this was more difficult than we imagined.  It is easy to recognize the wrong, but it’s harder to articulate and envision what could be right. Sitting at a long table, imagining the future of our nations, we invoked all the utopian visions that our ancestors leading resistance movements had tried (and sometimes failed). From this we created a manifesto describing the qualities of the leaders we want.

We then began to craft these qualities into an image. The group divided themselves into two- the directors and the muses to create the image of the mural. A flower was put in the hair, a fist was raised, a paper and pen added to represent dreams and a manifesto of the future. We chose four leaders (to represent a diversity of power) and the image was jeweled with symbols of compassion (a flower), justice (a weighing scale), abundance (overflowing rice) and mobility (a can of fuel).

Actor, writer and Fearless Artist from Colombo, Vasi Samudra Devi was one of the people representing the leaders we want in this image and about this experience she said:

“I’ve never put myself in the position of someone who leads before, so this was a very special experience for me. The fact that I was cast in the light of someone who embodied hope and promise for a future. It felt incredible!”

Once the image was prepared, Vicky, Minal, Shilo and Vasi along with other allies started painting at Gotagogama. The local artists in the art space tent were more than kind to give us space and support us.

Very often maps are made by those in power to define territory, as a way of claiming land. We created a detailed map of this utopian village- Gotagogama. As a marking of sovereign territory. People from various tents across Gotagogama would come and ask the artists to add tiny details to make their tents identifiable. It felt like an act of permanently sealing their representation and presence at the site, making the mural their own.

It is the kindness of people that keeps the spirit of Gotagogama alive. We were given snacks and water bottles amidst a food crisis. The protestors made coffee and tea, and asked the artists to sit in the shade when the sun became unbearable. Amidst the long lines for fuel, people were still coming together to paint the mural, despite the heat.

The last day, little children came with their parents to paint, there was face painting and Vicky, our ambassador, made resistance henna on people’s hands- kerosene bottles and gas cylinders, as a mark of protest.

Why do we need utopian visions? In moments of crisis what role does imagination play? In our cartography of dreams we painted a reclaimed and burning parliament, we imagined statues of oppressive leaders being destroyed. We imagined  libraries that told people’s stories.

A few weeks later- the parliament building was stormed by the people, the statues masked and the library from GGG  taken into the government building with a human chain. The world watched as Sri Lanka took back its power in joyful cathartic ways with Gotabhaya Rajapaksa’s  eventual resignation.

Utopia is a placemaking tool; like a map, it gives us the direction we need.

Painted in shades of flame and gold stand four future leaders, making their own maps, defining their own visions of the future.

“We are our own leaders, We take our power back”